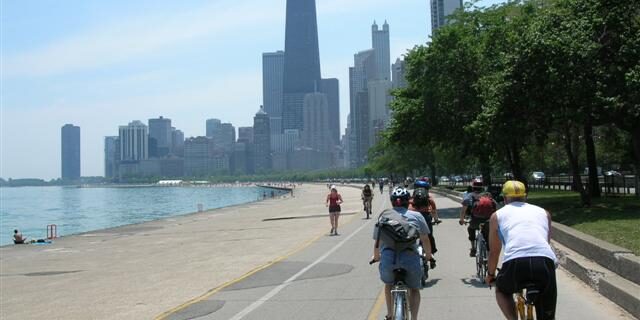 Over the past few years, Chicago has become one of the most bike-friendly cities in the United States.

Today in Chicago, there are nearly 300 miles of protected bike lanes stretching through city neighborhoods.

The implementation of DIVVY bicycles for rental use has resulted in a sizeable increase in riders, both for recreation and daily commuting to and from the workplace.

As bicyclists have become a more significant presence on Chicago’s streets, it is important to be aware of the municipal codes that have direct application to anyone riding a bike in the city.

First, it should be noted that bicyclists are given identical rights responsibilities as drivers, and there is particular emphasis in the Chicago municipal code placed on cyclist’s observance of and adherence to all traffic signage posted.

With respect to designated areas for bicyclists to ride, any individual more than 12 years old may not ride on city sidewalks, and bicyclists must use established paths and lanes when riding.

The municipal code specifies the sidewalks in the 6400 block of Sheridan Road as an area where bicyclists are strictly forbidden to ride. This area has a very high concentration of retirement homes, and there are many senior citizens who use the sidewalks daily, who could potentially be injured by bicyclists. Failure to observe this rule will result in an impounding of one’s bicycle and a $250.00 fine.

Bicyclists must always yield to pedestrians, travel at a speed which is not considered dangerous for the area in which they are riding, and must ride in single file when not on bike paths.

Additionally, bicyclists must be sure that when they park their bikes, pedestrian traffic is not impeded.

Finally, the municipal code mandates the usage of front and rear lights when travelling on a bicycle at night, both of which must be visible from 200-500 ft.

Although bike riding in Chicago can be a very healthy and environmentally conscious way to get around, it is beneficial for every bicyclist to know and practice safe riding according to the municipal code.

If you or a loved one were injured while bicycling anywhere in Chicago, contact our office today at 312-888-6058 We can help.